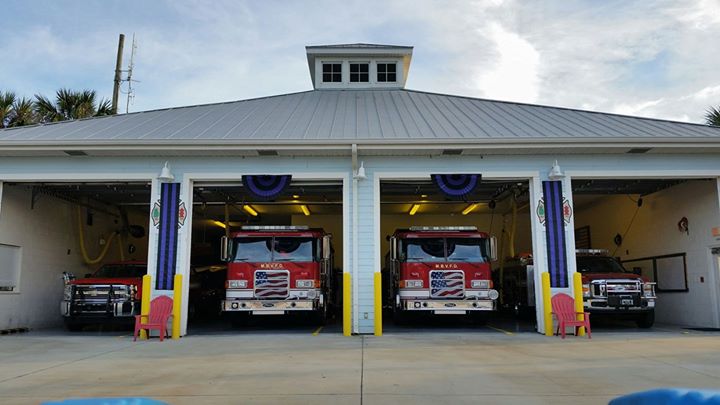 A Brief History of the Melbourne Beach Vol. Fire Dept.1953-1954 – On June 15, 1953 six town residents met with Brevard County’s local fire commissioner to discuss the possibility of forming a volunteer fire department. At a second meeting on June 17th, the Melbourne Beach Volunteer Fire Department was formed. On June 22, the original six members decided to change the department’s name to the Beach Volunteer Fire Control District. The Department was formally incorporated in January 1954. The Department’s first vehicle was an Army surplus truck that had been converted to a brush truck. It was provided by Brevard county in August 1953. The first two bays of the fire station were built in 1954 on the site of an old tennis and shuffleboard court. This first station was built with the labor of the volunteer firefighters and funded by donations. Before the station had been constructed, the truck was usually parked outside the home of Paul Earlebach, the Department’s first Fire Chief. During the early days of the Beach Volunteer Fire Department, firefighting was a very basic affair. Emergency calls were telephoned to a member’s house. That member would then pick up the truck and drive to the homes of other members, sounding the siren as he pulled up the driveway. These members were not provided with any protective clothing and had to fight fire in their everyday street clothes. The Beach Volunteer Fire Department answered fire alarms both on the beach and on the mainland. 1958 – The Department’s members voted to leave the Brevard County Fire Control District and devote its primary attention to the growing Town. The Department’s name was also changed back to the original Melbourne Beach Volunteer Fire Department. The original brush truck was replaced with the Department’s first real fire engine, a 1969 Jaco. Advances have been made throughout the years with regard to vehicles and other safety equipment. The fire station was added onto over the years to accommodate the growing department and larger The Unofficial Facebook Page Melbourne Beach Station 58 Fire & Marine Rescue